The Summer Split for Season 4 of the SMITE Pro League will begin on Thursday, and there are a number of teams with a lot to prove going into the new competitive season.  In North America, the entire region has struggled to win international competitions as of late, and while there’s a bit of a level gap between top teams like Team Eager, Luminosity, eUnited and the rest of the group, all of the teams will need to step up their game if they want to perform well against the EU teams at the SMITE Pro League Summer Finals at DreamHack Valencia this summer.

In Europe, NRG will be looking to climb back to the top of the scene after a lackluster showing during the Spring Split, and later at the Spring Masters where they bowed out of the competition in the quarterfinals.  After a first place finish in the Spring and another at the Masters, Obey are still the team to beat across all regions, and it will be interesting to see how well the team that has traditionally played as underdogs will perform with a target on their backs.

Regarding team and game changes heading into the Summer competitive season, there have been some roster swaps and organizational changes in the weeks since the last Split.  In Europe, two new teams replaced the relegated Sanguine and Novus Orsa.  Eanix swapped out Xaliea and Cherryo for Faeles and Duck3y, while the remaining professional teams from the Spring kept their rosters intact.

Across the Atlantic, SoaR Gaming left the SMITE scene with little fanfare, and the remaining players are playing under the name “Monkey Madness”.  Flash Point managed to survive relegation and proceeded to drop three veteran players in favor of newcomers Sops, sheyka, and DanteLeFargo.  In one of the biggest changes in scene, Michael “PolarBearMike” Heiss made a move from playing the support role with Team Allegiance to working with eUnited, who dismissed longtime team captain Louis-Philippe “PaindeViande” Geoffrion. 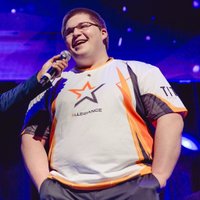 Heiss spoke to Esports Source ahead of the Summer Split about some changes he’d like to see to SMITE’s competitive map, Conquest.  Pro players and casuals alike have been vocal about the current “snowball” meta that is allowing a team to build up a crushing lead early, thus leading to some incredibly short SPL matches.

The meta has been the cause of frustration for some, but Heiss says not to expect changes any time soon.

“It has limited what HiRez is able to do with the game and it hurts their ability to change metas. I think until we get to Season 5 with a new map, games will be a bit too quick.”

When asked about the teams that pose the most threat to himself and eUnited this season, just one came to mind:

“I feel like I always want to play against all of the top teams so I really wouldn’t have anyone that I don’t want to play against.  If we were in the finals of a tournament then I’d hope NRG isn’t on the other side just because of their history as a team and how dominant they’ve been in the past.”

As for his own position, PBM was frank when it came to the discussion about who is the best Support in the world.

“I think the best support in the world currently is Emilzy, he understands the duo lane meta very well and he and Ataraxia consistently get leads for their team because of that.  I also think he has a good god pool and he puts a lot of effort into the game in general.”

The 20-year-old player from Maryland also offered some thoughts on the support role:

“I think being the best support normally comes down to being on the best team.  It’s really hard to recognize someone in that role for playing exceptionally well if the rest of their team is falling behind because playing from behind as support is extremely difficult in this meta.  Raffer and Aror would probably be the other two I’d put up there with being the best currently.”

Who will be among the best this Split?  The first match of the Summer will be Europe’s Elevate against Team Dignitas.  The game begins at 12pm EST and will be broadcast on HiRezTV.