The following is a simple guide to watching and understanding Counter-Strike: Global Offensive.  This guide is intended to initiate the very casual viewer, and allow them to be able to enjoy watching the many CS:GO matches across various leagues and tournaments.  If you’re not sure what’s happening in the game, you’ll understand by the end of this post.

CS:GO is a multiplayer first-person shooter.  Two teams of 5 players face off as either the Terrorists (Offense) or the Counter Terrorists (Defense).

The teams play a best of 30 rounds match.  In order to win each round, a team must kill members of the other team and/or complete the map objectives.  Players kills and completed objectives are rewarded with in-game currency for the players to use on better weapons as the rounds progress.

The teams start on opposite sides of the map. 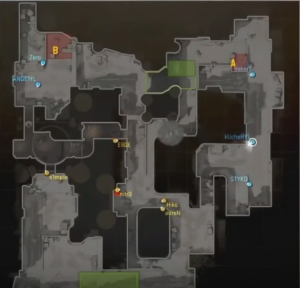 Terrorists (offense- highlighted in orange) must plant an explosive at either the A or B bomb sites and make sure it detonates before the time runs out.  They can also win a round by simply killing all of the members of the other team.

Counter Terrorists (defense- highlighted in blue) have to prevent the explosive from being planted by killing all of the Terrorists OR defuse the planted bomb, OR simply stay alive before the time runs out during the round.

After 15 rounds, the teams switch sides/roles, meaning the Terrorists are now the Counter Terrorists, and vice versa.

Each round is 1:55 long.  Player health starts at 100% at the beginning of each round.  In the above screengrab, you can see the health bars are either blue or yellow for each side.

The Pistol Round is the first round of each half.  Each player starts with just $800, meaning they can only afford to buy a pistol.   After 15 rounds, the economy resets, and the players will have another Pistol Round to start the second half of the match.

In the rounds in between, the players will buy guns and grenades in a strategic manner to give their team the edge in the game.  If the players do not die, their weapons, armor and utilities can be saved for the next round.  (Example: A Counter Terrorist team finds themselves in a 3 v 5 situation late in the match- they know they won’t have time to build up the money to buy all new weapons,  so they choose to back off and let time run out so they can keep their weapons for the next round.)

When the score is 15-15, there will be an overtime round to determine the winner.

When you watch your first professional match, you will be watching from an observer’s point of view, meaning you will see all of the players highlighted on the map.  The players themselves cannot see the other team or their teammates through walls, around corners, ect. 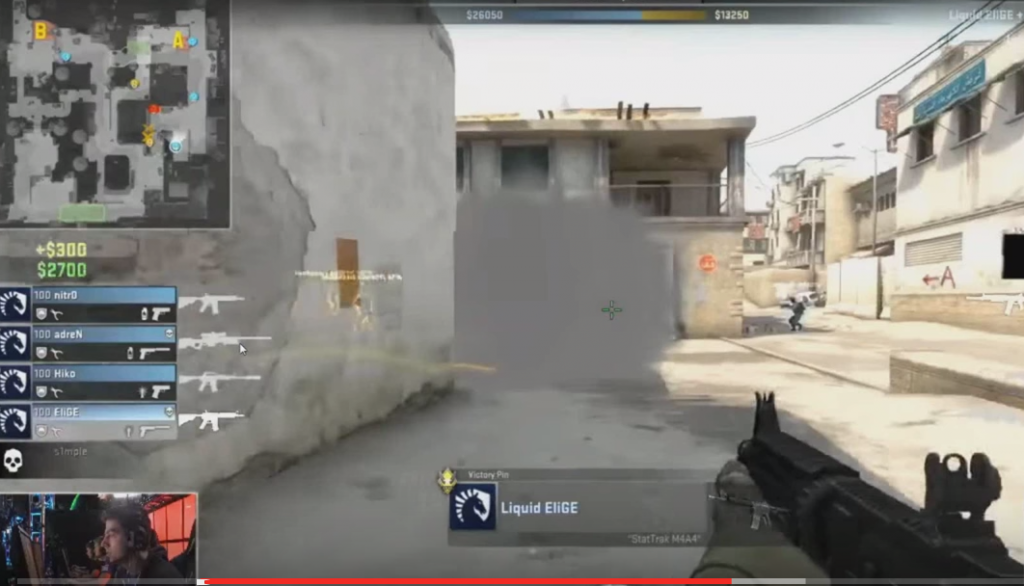 Players will deploy smokes (as seen above) to obscure the vision of their opponents, thus getting time to line up a shot or buying themselves time to get out of a gunfight.   Smokes, grenades, and molotov cocktails are all AOE (area of effect) tools that can be used either to inflict widespread damage and obscure player vision.

Players CAN be harmed by their own weapons.

Teams typically consist of an In Game Leader who is the shot caller for the team, two support players, an AWPer, and a top fragger.

These are one or two of the most important players in the team. The entry fragger is the first one into the room, is good at checking corners, and is often a highly skilled player who can pull off quick and deadly shots to give the team an offensive advantage quickly.

Not everyone is a flashy player, and that’s where the support comes in.  They do the objective work of planting the bombs and defusing when needed.  They gather information for the rest of the team by watching where the other team is going.  The support players often set up a bomb site for entry with smokes and flashes.

The AWPer is the team’s James Bond- often sniping out of sight and going for the smart picks rather than the big flashy plays.  The AWPer often picks off a key player of the other team and then promptly falls back.  They are often paired with a support or clutch player.

Of course the best way to understand the game is to watch it!  Here’s a look at Map 2 of Team Liquid v Luminosity at the MLG CS:GO Major in Columbus, Ohio in February of 2016.