The Call of Duty World League is attracting some negative attention going into the final week of regular play.  OpTic Gaming, of the Activision sponsored/ESL run league’s biggest teams, the team seen as the face of competitive Call of Duty, has faced a number of forfeits in recent weeks, and they may soon have to forfeit once again.  OpTic Gaming’s Karma and Crimsix both say they have been suspended for one league match.

OpTic Gaming currently sits atop the North American league with a 15-5 record, with two of those losses ruled as forfeits (one of the wins was also a forfeit by TSM).  In an online league, connection issues/in-game lag tend to affect everyone, but nowhere is the problem more visible than at the top of the table where the league’s star players have been expressing their frustration with in-game issues and out of game rulings by the Call of Duty World League officials.

Following a wild 3-2 win over bottom-dwelling team 100Thieves, Damon “Karma” Barlow made a video about his opponent’s pick and ban strategy and play style. He also released a Twitlonger expressing his frustration with the way the league is being run.  Ian “Crimsix” Porter also had disparaging things to say about the very close match and the league in general, and he said them publicly during his live stream.  Both actions fly in the face of the league’s public behavior policies, and punishment could have been expected for those statements.

The match in question took place on June 27th.  According to the players’ tweets, the Call of Duty World League suspended the players following a key show match between OpTic and rivals Faze Clan took place on Thursday, June 30th. It is unknown if it simply took the league officials that long to review all of the video and social media evidence before making a decision.

Crimsix confirmed his suspension as well, but with a lighthearted tweet: 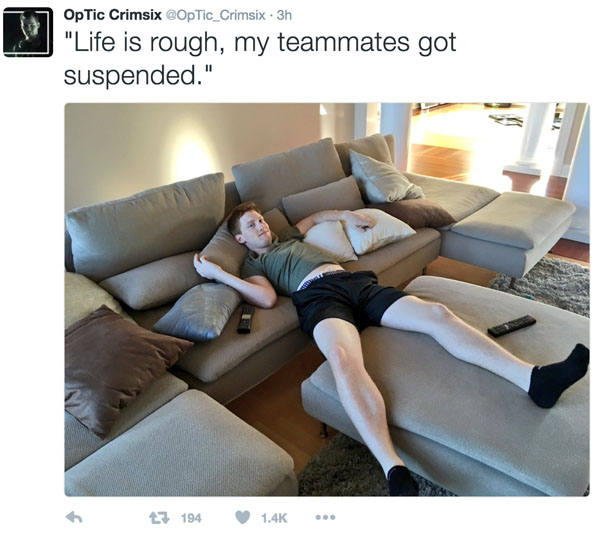 To be clear- a suspension and forfeit would hurt the OpTic players a minimal amount.  As stated above, the team is currently at the top of the table, and they will have absolutely no trouble staying in the league. The outcry from the fans centers around the fact that the subsequent forfeit in the final week of the Call of Duty World League could give a free win to Dream Team, a squad that is perilously close to the drop zone,  and currently in 8th place.

UPDATE:  The Call of Duty World League officials have announced they are rescheduling OpTic Gaming’s match against Dream Team in order to “enhance the competitive spirit”.  Here’s a look at a portion of the statement released to Reddit:

We have been rescheduling week 12 of the CWL to guarantee these important matches are played out in the most exciting environment.

That’s why on Thursday, July 7th, all 4 CWL matches played that night will be simulcast to enhance the competitive spirit of what will be the most important day of competition before Stage 2 playoffs.

OG will forfeit 100T instead, a team that is very much at the bottom of the league, and for whom a forfeit would not benefit them in any way.

A look at the NA League table:

The alleged decision to suspend the OpTic players now- instead of earlier in the week when more games were left to be played, is a baffling one at best.

eSports Source has reached out to the Call of Duty World League for a statement confirming this action, but as of press time- we have not heard from them. The league rarely makes public statements about their disciplinary rulings, and often fans and media alike only find out about the decisions when players tweet their side of the story.

Unlike Riot or Hi-Rez, who run the League of Legends and SMITE leagues, CWL does not issue regular press releases about their decision making process, leaving their rulings open to wide criticism online.

The league is still in its relative infancy- this is only the second season of play.  So far, Stage 2 has been marked, not by overwhelming entertainment, but by an overwhelming number of forfeits.   Following the finals and relegations for this stage, the Call of Duty World League Championships will take place at the CoD XP event in September.  Going forward, it is unknown where ESL and Activision will take the league, but it’s clear some communication and ruling transparency may be needed in the future.