News Ticker
The world of competitive gaming can be an unforgiving place, especially for those who are trying to break into the upper echelons of their chosen title.  It’s an industry with a lot of homogeny, and any differences, any slip ups, and anything seen as a “problematic” can put one’s career in jeopardy.
It’s also an industry whose face is overwhelmingly male- but can a female make it to the top of her game?  ESS recently reached out to one woman who is doing just that. 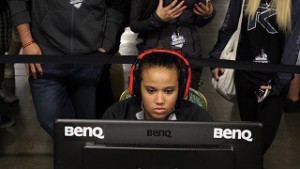 Ellen “DreamCrazzy” Elizabeth is a Call of Duty player for Riot Gaming in the North American Female Pro League.  The 27 year old player also competes in Call of Duty World League events- most recently she played with a team called mBc at MLG’s Anaheim Open.  The team was bounced from the tournament in the fourth round of the Open Loser’s Bracket.
Below is an interview with Ellen about Call of Duty esports and her hopes for her career:
ESS: When did you first start playing and why?
DC:  I first started playing Call of Duty when COD4 was released and picked up the game due to a car accident I was in and I wanted to try something new.
I never played a shooter game online before and it was so much fun.  I was instantly hooked.
ESS: What are your most notable accomplishments as a pro?
DC: MW2 (Modern Warfare 2) I was a pro and on the pro players list.  Black ops 2 I won a lan called Gamers for Giving (G4G), EBash, and then placed 7th at a UMG LAN.
I always had a habit of taking breaks sometimes and [it is something] I deeply regret.

ESS: Tell us about your first LAN tournament.  What was it like?
DC: My first LAN.. wow.. it was back in 2011 at MLG Columbus for Black Ops 1.  I went with an all girl team named BABE (Bee, Anna, Bri, and Ellen) and honestly I don’t remember what we placed I just remember not doing as good as I would have liked to.
ESS: What are your expectations for your team during this season of the FPL?
DC: To win.
ESS: What is the level of play like in the FPL?  Is it like the PA League?  The Call of Duty World League?
DC: Most definitely not. There is a huge skill gap between the FPL and the CWL 100%.
ESS: What do you attribute to that skill gap?
DC: There’s a skill gap because females only play other females. Most only play each other. You need to play in tournaments, scrim against better teams to get better. Most don’t do that. They lose and don’t learn from the loss.
ESS:  Chance (a Call of Duty caster) recently compared CWL to FPL by comparing men’s and women’s chess.  Do you agree with his assessment that the FPL opens up opportunities for women to get into playing CoD at a higher level?
DC:  I agree with this article. There really is not a lot of females in the scene and the FPL is a great way to showcase that and bring more in then maybe down the line compete and play in the CWL. It’s a new beginning and new opportunity for females that are just starting.
ESS:  Do you prefer to play with all female teams or mixed gender squads?
DC:  Personally I prefer to play with males. I have nothing against playing with females, it’s just males fit my personality better and they are more calm and level headed in game.
ESS:  Would you be interested in attending and playing in an all female tournament?
DC: Sure why not, I want to be the best and keep proving that with my actions.
ESS: What do you think can be done to encourage more women to get involved in esports at all levels?
DC: There is not much that can be done.
The FPL is doing just about all they can do to showcase and promote women in gaming. It’s just one of those things- if you like it you do it, if you don’t then don’t.
ESS: If you weren’t a Call of Duty player, is there another game you think you could play competitively at a high level?
DC: Hmm… it would have to be a game I enjoy. I would play either SMITE, CSGO, or Halo
ESS: Finally, what advice could you offer to players hoping to break into competitive Call of Duty?
DC:  Advice would be to just learn the game. Do everything you can do to individually become a better player. Watch pro streams, enter tournaments, and practice.