We’ve been reporting for months concerning rumors and even better rumors about the newest edition in the Call of Duty franchise, and today the rumor mill began to cycle again with a possible name for the game: “Infinite Warfare”.

Eagle eyed Redditors spotted the leak this morning (4/26) when browsing the Playstation store: 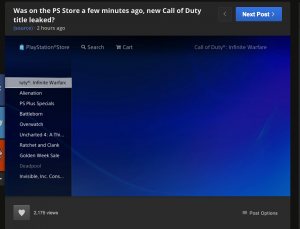 The title doesn’t have a description, but it fits the previous naming conventions we’ve seen with previous Call of Duty titles.

Infinity Ward (the developer for the next Call of Duty installment) and Activision have not confirmed or denied the name at this time.

So I feel like “Infinite Warfare” implies there is a bunch of time travel. Past, present & future.

I don’t care if the game is in space, as long as my feet are on the ground and I’m not thrusting around, I’m going to love the game.