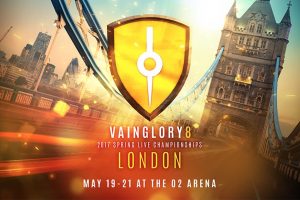 The Unified Live Spring Championships for mobile MOBA Vainglory will be held at the O2 Arena in London on Friday, May 19th through Sunday May 21st.

Next weekend’s event will see the top six teams from North America and Europe playing in front of a live audience for the first time since the Vainglory World Championship in December.

If you want to check out the tournament in person, tickets are available now for £15, as well as VIP Packages for £65, which include access to all 3 days of competition. Fans can purchase tickets now on Eventbrite.

What could top a tropical getaway for Hearthstone players?  Maybe a glamorous trip to the big city!

Following their Winter jaunt to the Bahamas, the Hearthstone Championship Tour is heading to Shanghai, China for the 2017 HCT Spring Championship from July 7th through the 9th.

The Spring Championship will be at the Silver Hall of the Expo Center in Shanghai, China.

The top four players from each region’s Spring Playoff (The Americas, Europe, China, Asia-Pacific) will qualify for a spot in the Spring Championship.  In Shanghai, those 16 players will battle in a dual tournament group stage, and the top two players from each group advance to the single-elimination playoff bracket.

The total prize pool for the Spring Championship is $250,000 USD.