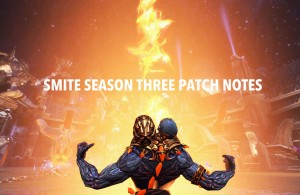 As Rosterpocalypse rages on in the competitive SMITE realm, Hi-Rez have dropped the game patch notes for Season Three.

Conquest Map Layout (Overall)– The main buff camps in the Jungle are more open to allow for increased movement (and ganking).

Jungle Camp– The Attack Speed buff has been removed completely.  The Speed Buff is now split between three Fire Elementals placed around the Fire Giant. The buff stacks a maximum of three times for a maximum 21% movement and attack speed increase.

The Mana Regeneration (Blue Buff) is now in the old Speed Buff Location.

Lifesteal: The power can no longer heal for more health than the target had.  This means if a target with 300 health is killed by a Basic Attack that dished out 350 damage, the player who got the kill will only heal themselves for 300.

There are also a lot of changes to Items which will affect god builds, and there are changes to many of the gods themselves.

Check out the massive amount of tweaks and major changes in the SMITE Season 3 PTS Patch Notes on the official website.