The SPL Spring Split is officially over and done, and during the interim period before the start of the summer season, there’s time to take a look back at some of the keys to a team’s success.

Specifically, there’s a chance to look at the players who made an impact at the SMITE Masters.  We all know that KDA doesn’t tell the true tale of any match, but it can give some insight into the way a team plays.  SMITE redditor Kipoythenarwhal recently shared an extensive infographic with statistics from the latest LAN competition: 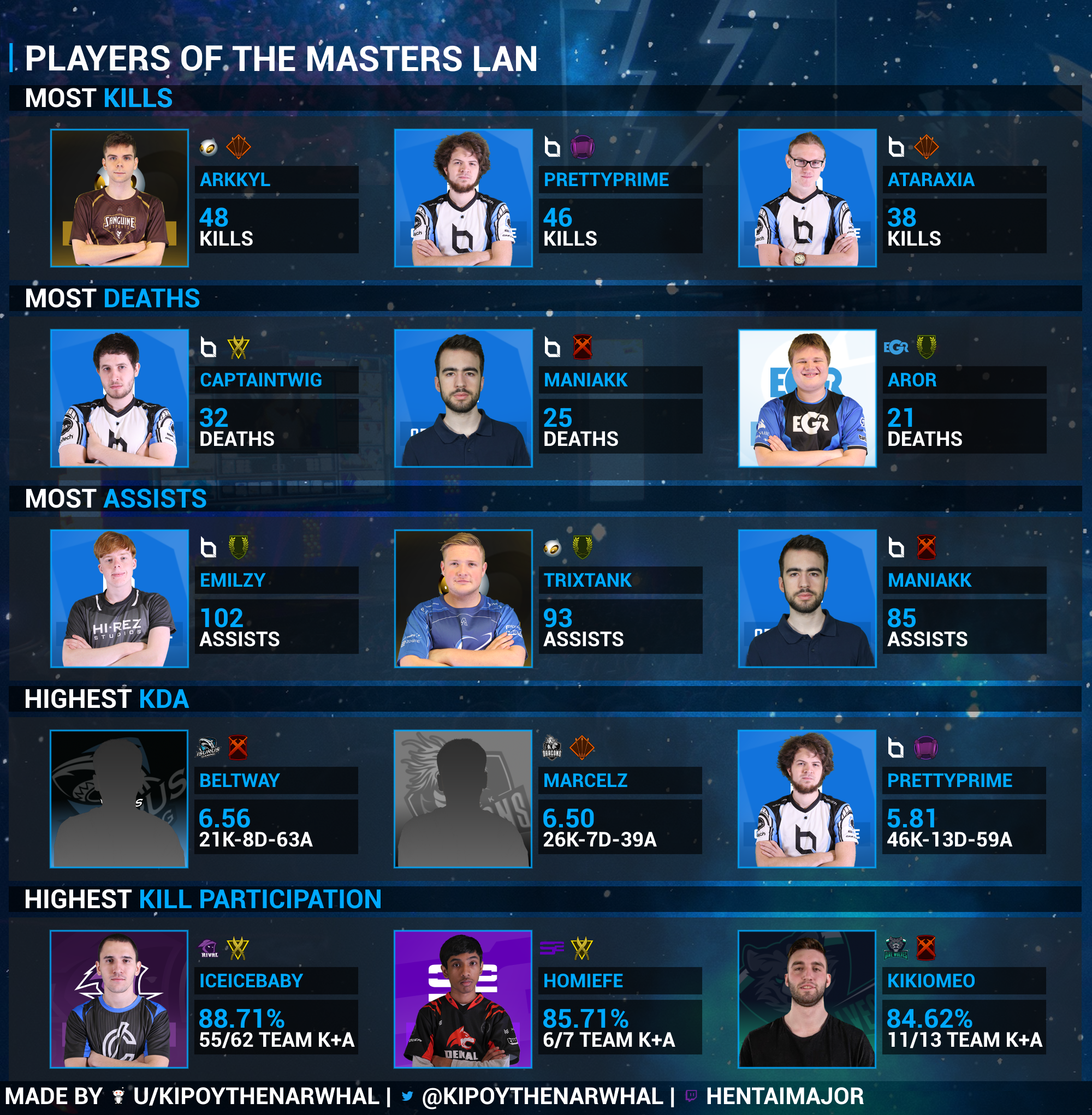 The numbers from one LAN don’t necessarily tell the tale of an entire season, but they can show why one team triumphed over all of their opponents during that particular weekend.  In the case of the SMITE Masters, every single member of the winning Obey Alliance squad made the top three in each category aside from Kill Participation.

Obey jungler Ben “CaptainTwig” Knight and solo laner João “maniaKK” Ferreira had the most deaths in the tournament, at 32 and 25 respectively, but that also reflects their aggressive play and willingness to sacrifice their lives (and stats) in team fights.  While watching the SMITE Masters, it was clear that many of the Obey deaths weren’t due to poor positioning or sheer recklessness, but rather a desire to engage the enemy head on and force engagements all around the map.

The players with the most kills are not terribly surprising, as long-time duo ADC Nathan “Ataraxia” Mark and mid Emil “PrettyPriMe” Edström combined for a massive 84 kills in their three tournament matches.  The pair regularly top the damage charts due to nature of their roles, but they were firing on all cylinders last weekend, and PrettyPriMe, in particular, made a nuisance of himself in just about every team fight with pinpoint precision ults and excellent positioning.  There’s a reason why PrettyPriMe was named the MVP of the tournament, and it’s because he played lights out from start to finish.

It’s also worth noting that had Team Dignitas managed to win the final, we would be talking about Kenny “Arkkyl” Kuska at length.  The French hunter topped the Kill column for the weekend and was relentless with his attacks in the first and third games of the Grand Finals.

One of the Obey’s newest additions was also one of their most important players: Emil “EmilZy” Nielsen.  EmilZy contributed a whopping 102 assists, and played the support role like a true tank, initiating skirmishes and shielding his squishier mates when necessary.  Emilzy joined the team at the start of Season 4, and he fits in well with Obey’s somewhat unconventional style of play.

Superb teamwork all around the map won Obey the tournament over the weekend, and other teams will need their level of cohesion to dethrone the boys in black and blue during the upcoming Summer Split.

.@obeyalliance are in control of this game all across the map! pic.twitter.com/tUHtuQLs6V

You can view the full set of 2017 SPL Spring Split and SMITE Masters infographics by KipoyTheNarwhal on the r/SMITE subreddit.