A quick and simple guide to getting into the popular fighting game.

The following is a guide to watching and understanding Street Fighter V.  This guide is intended for new viewers, to enable them to enjoy the technical and fast paced nature of Street Fighter V.

Street Fighter V is the quintessential modern fighting game.  Players go head to head as fantasy martial artists in a match where the goal is to empty the opponents life bar.  These matches typically consist of best out of three games, with each game being best out of three rounds.  If the players do not beat each other after 99 seconds, the player with the highest life total wins the round.  Occasionally two players may knock each other out at the same time.

Typical Street Fighter tournaments are double elimination, which means if a player loses two matches they are eliminated from the tournament.

The edges of the screen will be divided based on the starting player, and each side will have the resource bars of the player that started on that side of the screen.  Knowing which side each character belongs to is as easy as seeing the character faces in the upper corners of the screen. 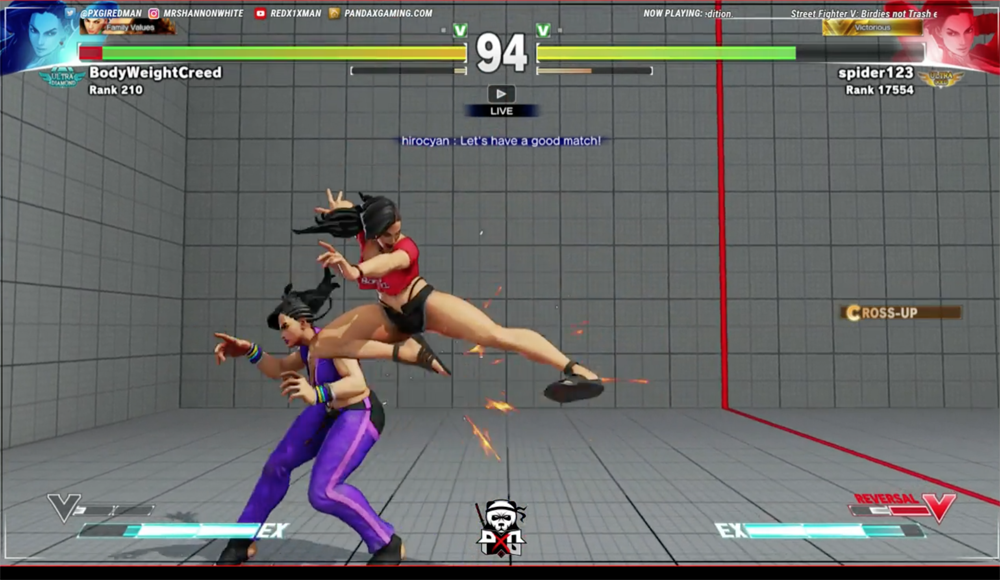 During tournaments, there will also be an overlay of the player name around or on their characters health bar.  The health bar is the most important bar on the screen, if either one becomes completely empty, the round ends.

On the bottom corners of the screen you have the V-Gauge bar and the Critical Art Meter.  The critical art meter (also known as super meter) fills up when players connect with attacks that do not use it.

The Super meter is divided into three sections, and each section can be used to power up a special move, or all three can be used at once to perform a Critical Art Attack (also known as super attack.)

The V-Gauge is a defensive resource bar that only fills up when a player takes damage, uses V-Skill, or connects with a heavy attack.  V-Reversal requires only one bar of V-Gauge and is an escape move unique to every character.  V-Trigger is similar to a Critical Art Attack except that it is more of a utility move specific to every character, some are special attacks while others are temporary buffs.

The last bars are the smallest ones, known as the stun bars.  Stun bars fill up every time a character is hit with an attack, but the meter empties quickly.  If a character takes enough consecutive attacks the stun bar can fill up and cause the character to be stunned, enabling the attacker to attack unblocked by the disabled opponent.

Play style will determine character choice for most professional competitors.

This is by no means a complete list of terms, but here are some of the words and phrases you may hear when watching a Street Fighter V broadcast:

The best way to learn is to watch tournament matches, here is one with informative and exciting commentary:

About David Eller 3 Articles
Competitive gamer, tech worker, aspiring comedian and coffee addict. I hark from the Northeast, grew up in one of the oldest towns in the country, and I'm known for having an entertaining perspective on things.
Website Google+