UPDATE:  Team Liquid and OpTic Gaming have qualified for the HCS Pro League!  See scores below.

The initial 16 have been whittled down to 8, but by the end of the day just two teams will make it into the North American Halo Championships Series ESL Pro League.  Six teams have already qualified through other events, and this is absolutely the last shot for teams who want to continue playing through the summer.

For the Last Chance Qualifier this weekend, the 16 teams were chosen based on their performances in a series of online qualifiers.  Five teams from the Summer Invitational received a bye, and remaining spots were taken by the 11 best teams of the 120 team pool in last weekend’s Open Qualifiers.

Here is a look at the bracket for Sunday’s competition.  The losing teams drop down a loser’s bracket.: 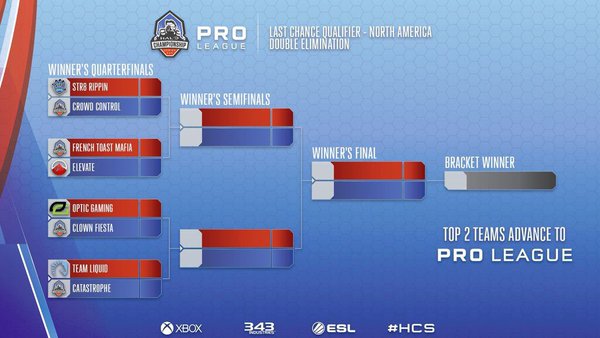 You can watch matches with casters on Twitch.tv/Halo.