The folks over at Hi-Rez listen to their players and their supporters, much to the cheers and chagrin of the masses over at r/Smite.  Following some questions about the lack of representation in the Japanese pantheon when trying to complete daily quests (doing 3 matches with a Japanese god was difficult with only Amaterasu to choose from), Hi-Rez introduced a new deity to the roster: Raijin! 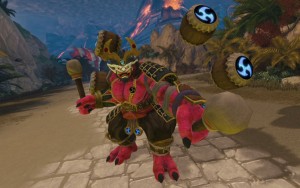 The master of Thunder (and an avid percussionist) the mage Raijin stacks his basic attacks by charging his drums.  Every four basic attacks will end with a charged ability.  He has an airborne ultimate, beating his drums to send down peals of increasingly strong thunder to damage enemies below.

Since SMITE has introduced Raijin, it’s likely we’ll see a Fujin (the god of wind) in the game soon, seeing as that’s his brother.

SMITE pro player and analyst Incon breaks down the god’s abilities in a new video here:

The new patch is expected to be live for all players February 16th.