News Ticker
Note: Today is a make up day for matches that were not played by NA teams on Tuesday due to travel delays.
What We Learned
Playing on an unexpected day may just be the key to connection protection.  Wednesday’s matches were heavily affected by disconnections and people DDOSing players.  TSM were forced to forfeit their match to OpTic Gaming, a serious blow for a team that is cusp of the relegation zone.  Today, the North American teams were playing on their own, due to unforeseen travel issues earlier in the week.  No teams were knocked offline, and play continued as normal today.  The sports betting sites did not have odds up for CoD matches today, so perhaps this was a factor.

It’s never over ’til it’s over.  OpTic looked like they had their first HP against far lower ranked CLG sewn up, but Felony got late score streaks, and managed to win the map by the slimmest of margins, 250 to 247.  Karma dropped 51 kills during that game. Second map, OpTic looked positively lost in the Search, as CLG took an easy 6-3 win.  It’s worth noting here that OpTic were playing with a sub (a very excited K1LLA).  OpTic bounced back a bit with a dominant 10-2 Uplink win, and a close 2-1 CTF round win including 2 flag caps by K1LLA.  The final map was never going to be easy, with S&D being OpTic’s noted achilles heel, but OG took it all the way to a round 11, before winning 6-5.
OpTic Reddit’s Discord channel exploded: 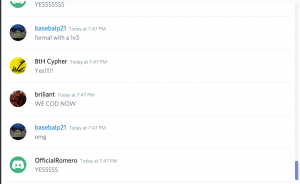