Since June 9, the world’s best teams competing in the Heroes Global Championship (HGC) have been battling it out to determine who would be crowned the winner of the HGC Mid-Season Brawl 2018 and take home the lion’s share of the tournament’s $250,000 prize pool. In the end, in front of a packed crowd at DreamHack Summer in Jonkoping, Sweden, it was the HGC Grand Finals 2017 champions – Korea’s Gen.G esports (formerly KSV Black / MVP Black) that emerged victorious.

Gen.G dominated the competition at the Mid-Season Brawl, going entirely undefeated throughout the tournament before taking on 2017’s HGC Mid-Season Brawl winner – Europe’s Team Dignitas – in the Grand Finals. However, Team Dignitas put up a heroic fight, trading wins with Gen.G to take them to a final Game 7 on Sky Temple. Ultimately, though, it was Gen.G who won, 4-3, to become the 2018 Mid-Season Brawl Champion.

The final results from Mid-Season Brawl are:

For all the latest news, as well as recaps and VODs from both events coming soon, head over to esports.heroesofthestorm.com. You can also find photos from the event on the Blizzard Press Center.

The HGC Western Clash, Blizzard’s international Heroes of the Storm competition, is back and will pit the top four teams from North America and Europe at Blizzard Arena Los Angeles!

Europe and North America’s best will be on hand for the Western Clash and they’ll be looking to the Blizzard Arena crowd this August to bring the passion and keep the hype going all weekend.

The Los Angeles Valiant are the Overwatch League Stage 4 Champions 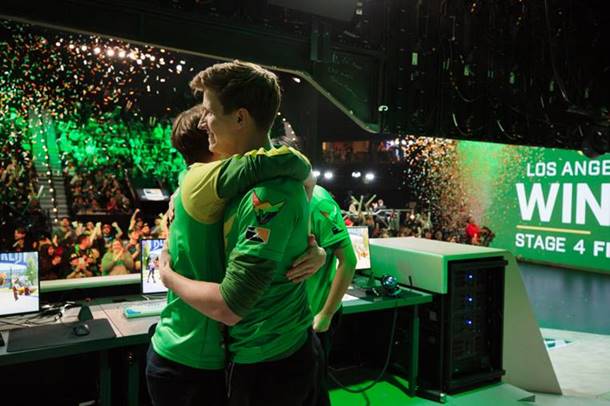 With the regular season now complete, the top six teams advance to the playoffs. The New York Excelsior and Los Angeles Valiant – as winners of the Atlantic and Pacific Divisions, respectively – earn a first-round bye.

When the sun sets in the West on July 21, teams of two will hop on the battle bus, grabbing their favorite pickaxe and glide for Red Bull Rise Till Dawn, a dusk to dawn Fortnite Battle Royale duo competition taking place on the 99th floor of Chicago’s famed Willis Tower. Featuring a unique scoring system, the tournament will start as soon as the sun sets at 8:21 PM and continue throughout the night as teams battle to accumulate the most points possible before the sun rises over Lake Michigan at 5:35 AM.

One hundred teams of two will embark on their overnight mission competing for points based on end game placement and eliminations of other players. The team which gains the most points by the time the sun rises will be crowned the winner. The tournament will feature streamer, Tyler “Ninja” Blevins and a teammate of his choice. Adding to the intensity, competitors who successfully eliminate Ninja and his teammate will receive bonus points.

“Competing and streaming Fortnite all night at the most iconic building in Chicago, a city close to my heart, is a dream come true,” said Ninja. “Red Bull Rise Till Dawn will be unlike any other tournament and something people need to see and experience for themselves.”

For those unable to compete in person, the entire tournament will be streamed via Ninja’s Twitch channel at twitch.tv/ninja starting at 8:00 PM CST on July 21.

Interested participants can register now at redbullrisetilldawn.com. Red Bull Rise Till Dawn is open to United States residents 18 years and older. The entry per team is $40.

Red Bull Rise Till Dawn is supported by HyperX, 7-Eleven and Smash.gg.