Turner and IMG’s ELEAGUE will host the first CS:GO Major Championship of 2018 –  The ELEAGUE Major: Boston – with live coverage from Boston’s Agganis Arena presented on Twitch, beginning Friday, Jan. 26, at 10 a.m. ET. Eight of the initial 24 teams remain in contention for the title of World Champion, and will face off in a single elimination bracket, playing best-of-three map matches until a victor emerges.  ELEAGUE will award the largest share of the event’s $1 million dollar prize pool to the winning team. 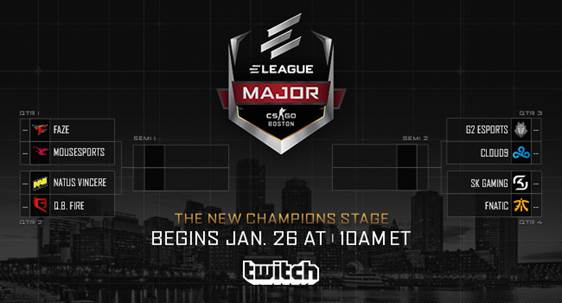 The first day of competition will include three quarterfinal matches, with the last quarterfinal and both semifinal matches set for Saturday, Jan. 27, at 10 a.m. Live coverage of the Grand Final match on Sunday, Jan. 28, will begin at noon and feature two hours of special pre-match programming.

Fans can purchase three-day tickets to The ELEAGUE Major: Boston at ELEAGUE.com/major. Each fan in attendance will receive a premium gift bag, as well as a CS:GO pin from Valve’s all-new Series 3 collection.

The StarCraft II World Championship Series is back! The first WCS Circuit event of the year gets underway in Leipzig, Germany this weekend from Friday, January 26 to Sunday, January 28, and esports fans can follow the action live.

Tune in on Twitch to catch some of the world’s top pro players face off for a share of $100,000 USD and a place at the 2018 WCS Global Finals. In addition, the tournament will give competitors the chance to pick up some valuable WCS Circuit Points—players who gather the most points over the course of the year will also earn places at the Global Finals.

Among those ready to battle is North American Protoss legend Alex ‘Neeb’ Sunderhaft, who dominated the WCS Circuit last year. He’ll be aiming to keep his hot streak alive in Leipzig, but is sure to face stiff competition from Juan Carlos ‘SpeCial’ Tena Lopez—the Mexican Terran player wowed fans at the WCS Global Finals last year with high-level play that earned him a top-four finish. Representing Europe, Polish Zerg player Mikołaj ‘Elazer’ Ogonowski will be up to any challenge following consistently strong play throughout last year’s WCS Circuit, including one WCS Circuit victory. Take a look at the full player list to see who else is competing in Germany.

For all the details, as well as results and VODs from the event, check out the official WCS Leipzig page.