Will a new champion be hold Thor’s Hammer aloft tonight in Atlanta?  Or will the 2016 Champions successfully defend their title?  Strap in and watch along with me as I document the highs, the lows, the missed ults, and the dank memes that come from the 2017 SMITE World Championship.

You can join in the live blog action by commenting below, or tweeting to @esportssource with your comment.  It’s your one chance to be famous on an esports blog, so take it while you can!

Note: the blog will auto-refresh, so no need to click wildly.

(scroll down for live blog)

We’ll start posting at 5pm EST! Send your match predictions for this final best of 5 set to esportssource on Twitter!

This is the final set. The trash talk is done, the scrims are over. This is is for it all… so here are the picks and bans. 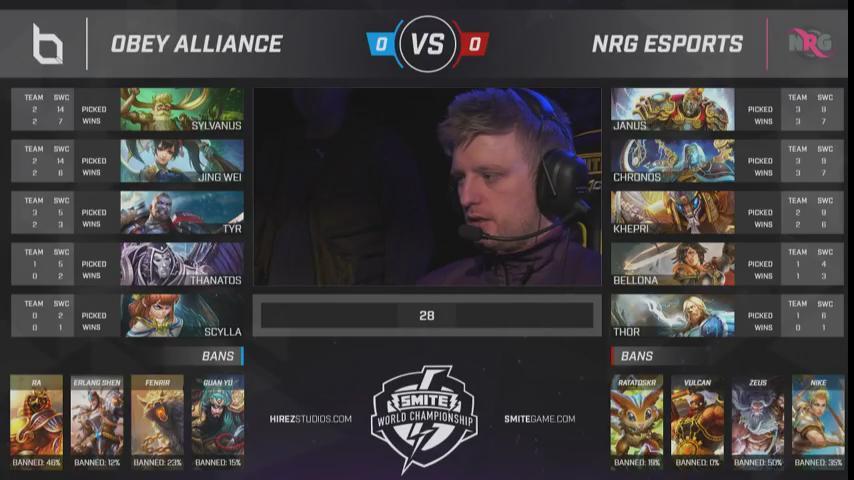 Some early skirmishes on the right, in the mid jungle, and down the middle lane, but first blood didn’t come until 6 minutes when Dimi was soloed by Variety.
NRG answered back with a hit on CaptainTwig. The teams are even on kills, with Obey having a 1k gold lead.

CaptainTwig’s Thanatos gets a gank on emilitoo thanks to the grab from Pandalike’s Sylvanas. Obey take the first Gold Fury (9 minutes).

Caster Adanas wants to know your pick to win it all (and frankly, so do I). You can see I quite like an underdog story- 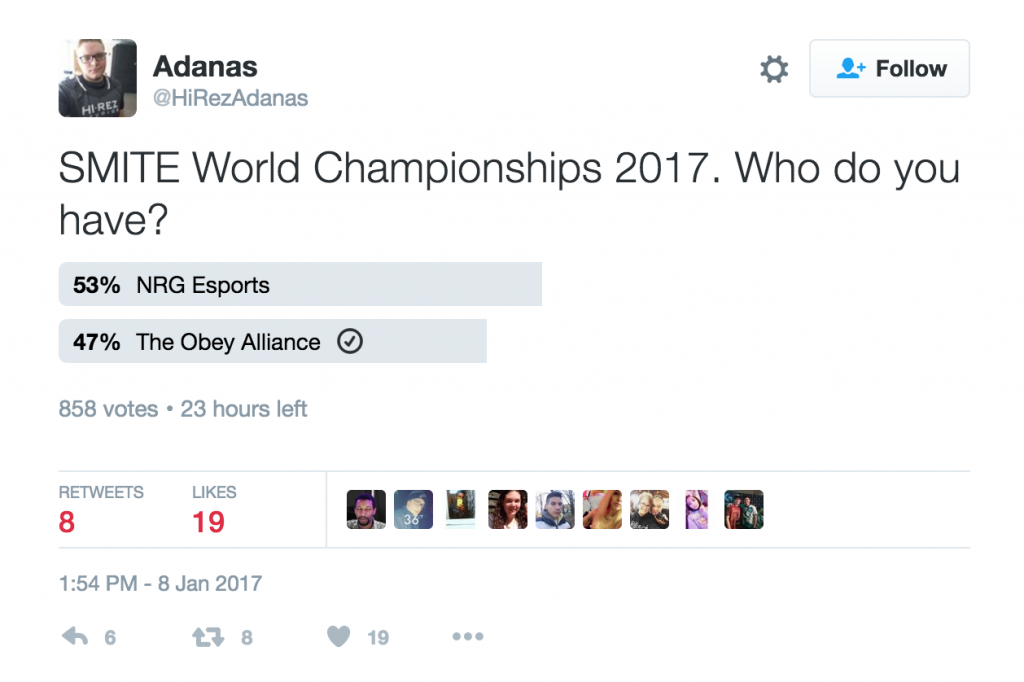 NRG are slowly building up momentum, playing for picks and taking a 4-3 lead. They take advantage of what appeared to be a lapse in concentration from Obey during a team fight when the Jing Wei missed her ult when initiating a team fight, and a blood bath ensued. They’re now up 7-3 after 14 minutes.

A battle for the Gold Fury ended in another couple of deaths on both sides, as Obey had trouble countering the Khepri ult, and they’re having trouble keeping CaptainTwig alive (5 deaths) when he’s playing very aggressively. (17 mins)

Obey are having some serious troubles with missed ults (Scylla) and letting iRaffer escape via a portal from Yammyn’s Janus.

CaptainTwig continues to play aggressively, but doesn’t really have the protection to back it up. Adapting has been putting out massive amounts of damage and stops as Thor, so things are looking a bit rough. NRG are up 11-5. (22 mins)

Allied is in the house for the final! One of the members of the EnVyUs team that won the first SMITE XBox One World Championship, he has taken time away from the game due to a cancer diagnosis. He’s been posting thoughtful looking photos all weekend, and this is one of the best: 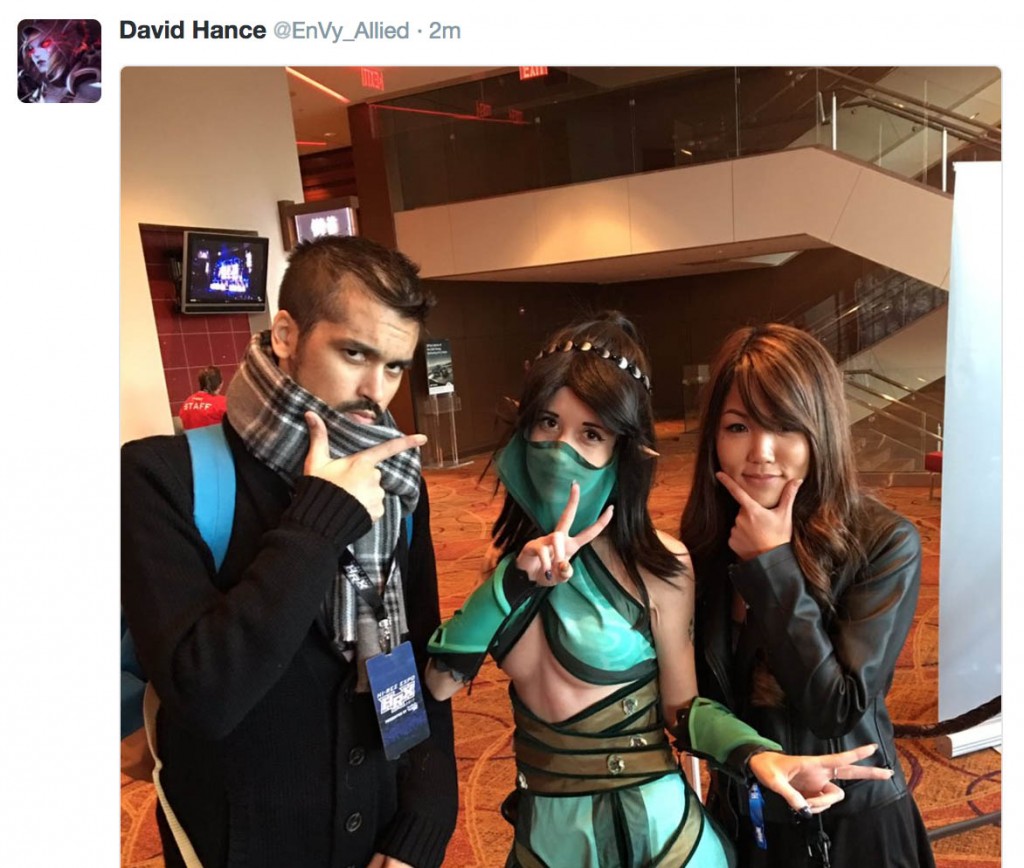 Finally the ults are connecting for Obey! Pandalike is able to set up a couple of kills for his team, and Obey go on to knock down the Fire Giant (27 mins)

Obey are trying to group up and knock down as many towers as possible, and NRG are doing the same, marching down the middle and the right to try to take out a few more towers. Bot of the teams only have one tower, and all phoenixes. (29 mins)

Obey take down two phoenixes off their scrim partners, and they’re pretty leisurely farming around the map now, taking the Gold Fury, and stealing as many buffs as possible. (31 mins)

It looks like Obey got a little too comfortable and lose two players (PrettyPriMe and Pandalike) while dallying near the fire giant. Obey still try to start up the FG, and Dimi jumps in to steal the Fire Giant! (33 mins)

Obey may have waffled on the decision to continue trying to take down the FG or kill Dimi, but they were sure in their decision to go after the respawned phoenixes of NRG. Some decisions don’t turn out the way you want, so they get chased away by NRG and lose Pandalike in the process. (35 mins)

This is well close, and NRG are merciless in their attacks. Pandalike is taken out in the middle, and NRG run down to take out one of Obey’s phoenixes. It feels like NRG are setting the pace of this game and Obey are just trying to catch up. NRG take another Gold Fury, and then rush over to try to take out the Fire Giant. Obey are there to meet them, and they are attempting to back up and try to bait out the fight from NRG.
CaptainTwig misses another ultimate, and dies quickly in the ensuing team fight. Desperate times for Obey now. There are three down for Obey now with very long timers. (41 minutes) 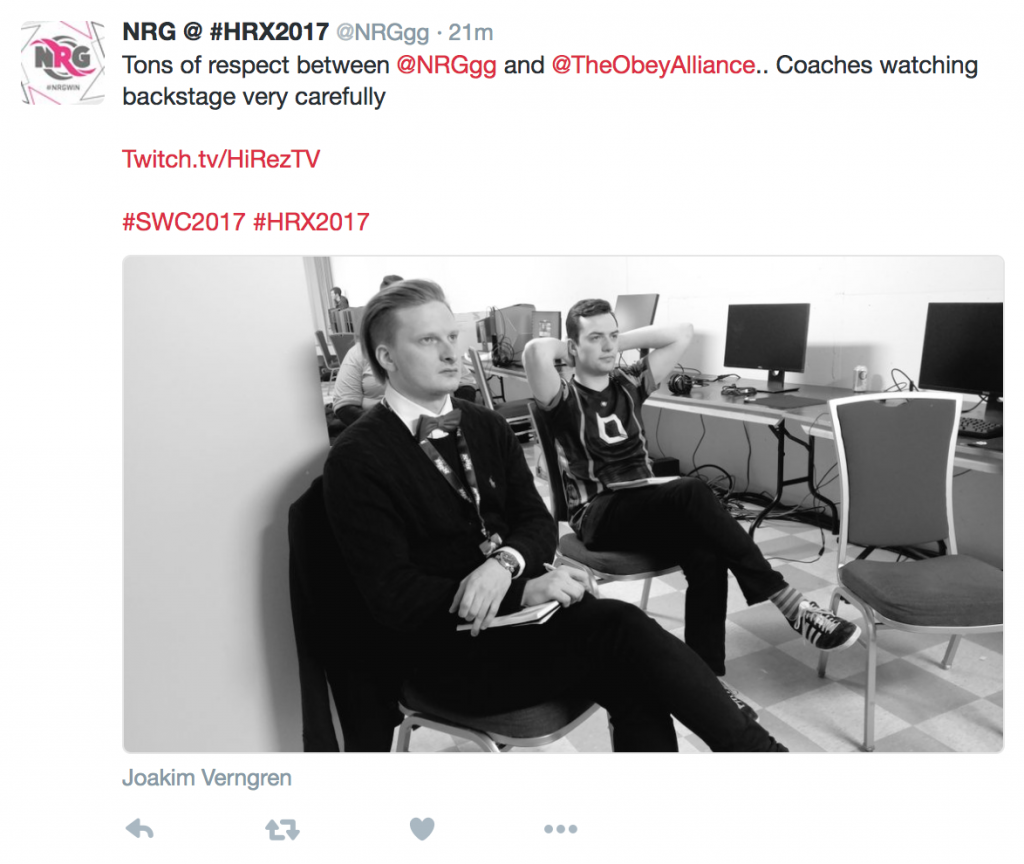 Obey are desperate to protect their base, and they manage to keep out NRG and then ignore the FG, and then march straight down to NRG’s base. They go RIGHT to the titan, and they hesitate, and iRaffer spawns, roots the players and they miss their chance to just take Game 1 right then and there. This is incredible. (47 mins)

NRG all respawn, and they kill off the whole of Obey, and then just stroll into their base and take out the titan. Stunning. You can’t make ANY mistakes against a team of this caliber.
NRG win Game 1.

Can Obey recover from this? That was a long first game, and they had what looked like a home run lined up to win it and they whiffed it. Wow. For their part, NRG must be breathing quite a sigh of relief right now. 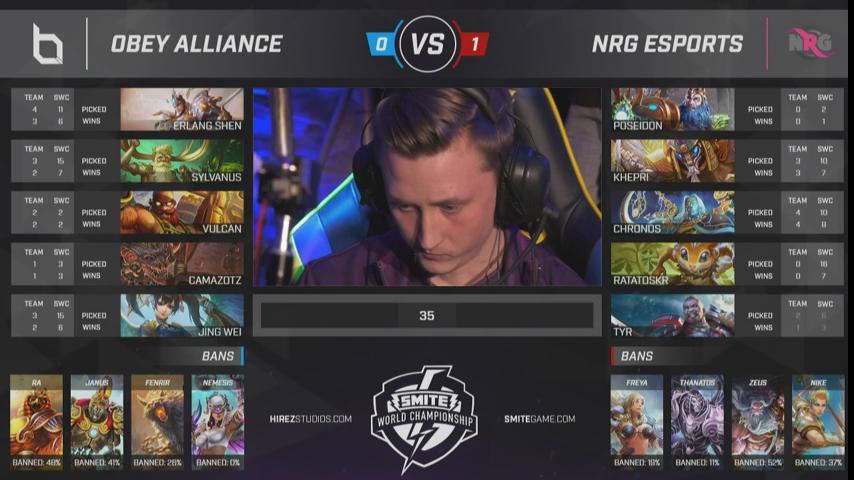 Again the first blood goes to NRG. A death for CaptainTwig follows. Are Obey tilted after that long first game? Obey have never actually beaten NRG in competitive matches (they are 0-9) before, so this may be a big ask for them to come back mentally.

Yammyn and his Poseidon take out CaptainTwig yet again. Obey are firmly on the back foot right now, and we’re only 7 minutes in.
While I was typing the above and trying to explain out loud why they aren’t showing replays on the broadcast, NRG took out three more Obey players. This isn’t pretty for Obey right now.

Yammyn’s ults have hit nearly every single time, and Variety is forced to put Obey on his back for a moment and pick up a double kill to get his team back in the game.
CaptainTwig is on 5 deaths. (12 mins)

Obey have taken the gold fury, but they’ve also lost all of their T1 towers. NRG is currently up 14-5 on kills. Obey are going after the NRG towers, and they manage to take out two. They lose one in the process. Still a game of catch up for Obey.

NRG take the FG following a team fight that saw Yammyn take out two Obey players. Obey take the gold fury and they only have one tower left. CaptainTwig has 9 deaths so he’s obviously not very well farmed. He’s currently a liability in team fights despite his best efforts. (25 mins)

CaptainTwig with some smart plays to bait and take out an NRG player in the team fight… but when Obey go for the GF, iRaffer shows up to ruin the party and three go down for Obey in the ensuing battle. CaptainTwig and Ataraxia are going to need to pick up the damage going into the end of this game. NRG are up 25-10.

Y’know, Yammyn is pretty good at this game. He gets a double kill, NRG rolls into Obey’s base, and that’s Game 2 done.
NRG win Game 2.

We saw 2 Game 5’s on Saturday, so can Obey go the distance tonight? The consensus around the media area is “Probably not”. We’ll see. Coming out with the picks and bans now. 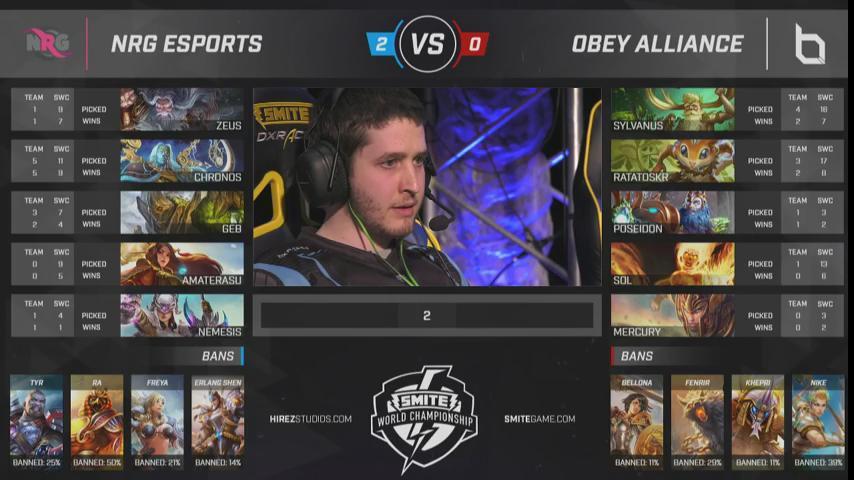 As usual, Obey get out ahead while farming, and Obey get the first blood, but CaptainTwig also goes down, and NRG take out Pandalike as well. (3 mins)

Variety continues to play a super aggressive game and initiates a team fight that results in a couple of kills for Obey. The team is back in this one.

Variety solos Dimi on the right, and that’s a man who doesn’t back down from a fight. He’s chasing down just about every NRG player he can. Obey are up 6-3 in kills.

Variety is playing in his first SWC and he is playing with absolute confidence, diving every tower, chasing down every kill, and it’s a sight to behold. PrettyPriMe and his Poseidon are getting revenge for Game 2 and releasing the kraken with deadly accuracy. Obey are up 11-7 in kills.

So many battles. Obey up 14-10 and Variety on his Ratataskar has half of those. Variety is having an amazing game.
NRG manage to take down a tower while Obey’s Sylvanus sacrifices himself so that Variety can scamper away after he gets yet another kill.

Dimi is basically distracting Variety now by forcing him to use mana in boxing matches on the right lane so the squirrel can’t hop into team fights and do some real damage. It’s a smart strat from NRG to counter the enthusiasm from Variety. Obey’s lead is getting ever slimmer. They lead 16-14 on kills, and have a 4k gold lead.

What a gutsy play by Ataraxia! Despite losing 3 teammates in a battle around the Gold Fury, he forces the team fight to continue, he takes out the rest of NRG and then goes to wait for his teammates so they can take the fire giant.
Obey get the fire giant almost down, and then just one NRG player slides in and steals it at the last moment.
Obey group up and play defensively to counter the increased damage of NRG and they aren’t able to get down any more towers.
NRG have just one tower left, Obey have 5. This is really heating up.

What a gutsy play by Ataraxia! Despite losing 3 teammates in a battle around the Gold Fury, he forces the team fight to continue, he takes out the rest of NRG and then goes to wait for his teammates so they can take the fire giant.
Obey get the fire giant almost down, and then Dimi just slides in and steals it at the last moment.
Obey group up and play defensively to counter the increased damage of NRG and they aren’t able to get down any more towers.
NRG have just one tower left, Obey have 5. This is really heating up.

CaptainTwig is a hero and has been distracting over on the right, and getting picks left and right. Obey take out two phoenixes, and then take out the Titan
Obey win Game 4! We have a series here!

No one ever doubt Allied again.

For Game 4, I will be on the floor getting video for our YouTube channel, so no live blog. I’m desperately hoping for a Game 5, and no matter who you support- you shouldn’t want this to end. That last game was non-stop action and almost redeemed that unfortunate Game 2 drubbing.
Strap in, things are getting serious here. 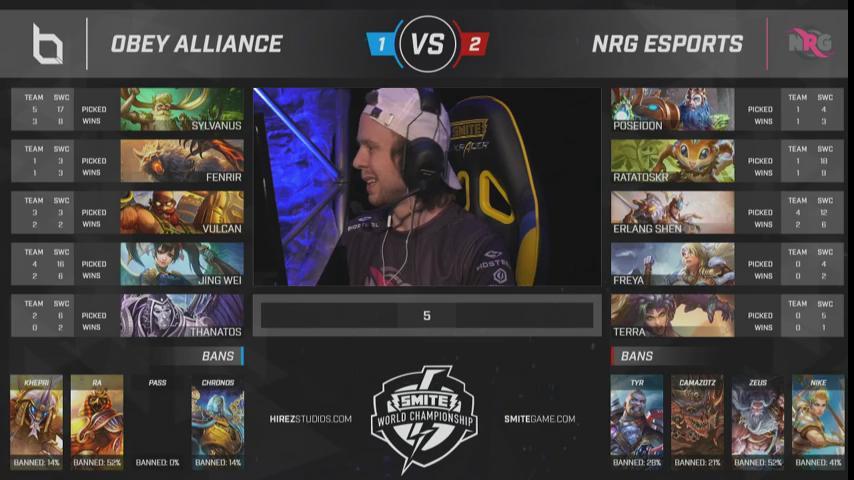 NRG win Game 4 and they are the champions again!

Check the Youtube for the NRG winner’s interview! Thanks for hanging with me!