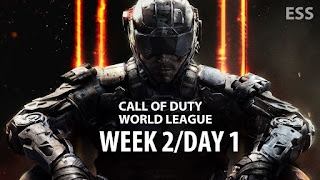 Small mistakes will make a big difference in NA this season.   FaZe lost hill control early in the Hardpoint, but their outstanding slaying performance helped them pull out the map win. FaZe ran into serious issues during the S&D when Attach lagged out during multiple rounds, leaving his team playing 3v4.  Despite strong plays by FaZe to try to out-think and out-slay EnVy, the boys in blue won 6-4.  After a tight first half of Uplink, FaZe began to pull away. What appears now to be a mistake by Slasher to play for streaks rather than points during a close second half may have been the difference between a chance at overtime and a map loss.

The quality disparity in the ANZ region is showing.  OrbitGG have coasted through the CWL thus far, their first match being a forfeit due to no-show players on the other team, and their next two matches have been 3-0 sweeps.  On the other end of the spectrum, the team that qualified last, Exile5, are truly struggling to keep up with the competition.  The team has not won a map in the competition, nor have they looked like a serious threat to the teams they have faced.  It’s early days yet, but Exile5 may have a very long road ahead of them.

Clutch is key.  Giants Gaming really needed a win as they came in today with an 0-2 record. The Spanish team have struggled initially in the EU league, and today they faced potentially tricky competition in UK team exceL eSports.  Two really nice games of Search and Destroy were the difference makers for Giants- in particular a Game 5 after a very close game of Capture of the Flag that tied the series 2-2.  Giants clutched up to win the subsequent S&D Evac map 6-2, and take the series with a 3-2 win.  They now improve to 1-2 in the league.

Infection Search and Destroy ACE by Eupho (GiantsGaming)
Millenium’s Tommey showing a bit of flair on uplink.
Karma with the play and Maven with the Harry Potter reference.
Day 3 Scores (FINAL)